The intro and why the Batcave Project Part 1

Ever since I was 10 years old I have always wanted to create my own LEGO Batcave. I even created my own custom Batman around that time, using a Blacktron Minifigure and made a cape from a black plastic bin liner.  My LEGO box then was not only limited by the elements that LEGO produced but also with the number of bricks I had at my disposal.

Fast forward to 2014, I had just come out of the hospital and was busy trying to rehabilitate myself. My hands and fingers still needed exercise to get back to full function, and my mind needed something to occupy.  I had PTSD from my experience and was seeing a psychologist for help with that.  It was the doctor's suggestion that I try building with LEGO to help.  That was me coming out of my dark age and returning to childhood memories that were very dear to me.

My first thought was to build sets, and although I liked the system and following instructions, building MOCS (My Own Creations) seemed inevitable, given how much of that I had done throughout my childhood.

When it came to ideas I had plenty and the plan was simple to build MOCS that I built as a child, only let's do them better.  The ones that stuck out was my Castle that lived on my Fathers Snooker table for a long time.  It had a large lion head, made from grey and black bricks, the mouth was the drawbridge and then off to side discussed as rocks/hideouts where huge paws that were used to launch my favourite knight of the time a dragon night from the set 6105 a collection of Castle Minifigures.  The castle was a combination of 6080 and 6086. I also had 6067 and the paws were based on the set I had and one of my favourites 6066 the camouflaged outpost.  Looking back the final build had some Thundercats inspiration to give you an idea of what I was watching at the time.

The Thunderbirds which I had built to play along while watching the classic show, I remember building Thunderbird 2 with two translucent cockpits from classic space, one a space police red and the other Mtron yellow.  The rest of the ship was also multicoloured and that didn't matter to me then. LEGO was just the best, didn't have to go an buy the latest craze I would just get more LEGO and build the characters and vehicles that I was watching on Kids Saturday Morning TV.

I built a space base from my imagination and the Teenage Mutant Hero Turtles (that's what they were called back then, Ninja was seen not appropriate).  I built the lair and then painted Minifigures with paints green.

Lots of other things as well but those stand out the most.  My biggest and still favourite character is Batman, there is just something about him that appeals to both children and adults, maybe its the fact that he has no superpowers and the problem-solving detective skills that have stood the test of time, 80 years to be precise at the time of writing this.  My Batcave back then was based completely of the 1989 film, it was and is still a brilliant film, dark and refreshing.  Batman in the Film and TV media was very much a cartoon figure thanks in most to the Adam West 1960's version.  I wasn't a fan of it at the time because I was reading the comics. However, I look back at it fondly now.  The 1989 Batman film made Batman more real for me and brought him off the comic pages and into the live-action.  Since then we have been spoilt.  Cristian Bale was brilliant, and The Dark Knight Trilogy is just something else.  I was very sceptical about Ben Affleck, however, the portrayal in Batman vs Superman ultimate cut was amazing. I like him better then Christian if I am honest.  I just wish Zak had finished his vision. I have watched the proposed version of the Justice League and have to say it would have been brilliant. Warner Brothers are idiots if you ask me. They needed to let it play out just like Marvel did.  I mean Blade was heavily criticised but if it wasn't for that film then the cinematic universe may never have happened. I mean Fox didn't really do a great job with Marvel characters did they. Anyways I am digressing. I'm excited about Pattinson's and Reeves take on it. It needs to be judged on its own rather comparing to what went before.

I think that sets the background for what comes next, quite nicely.

Its always going to be a popular subject and from that comes Batcave MOCS. There have been loads some epic in different ways.  Do I like any in particular? I am going, to be honest, I don't like any of the big and well-publicised versions and I will elaborate why.  I do like sections of the builds, and yes they have definitely influenced me, I kinda hope that the versions I have done and put out there on various platforms and at shows have influenced others as well.  I am not going to name specific ones as we all know the ones that are out there and have made it on to the Brothers Brick, Beyond the Brick etc.

The reason I don't like them as a whole is that my goal for a Batcave is individual to me, my idea of it is also different and this is the journey I have been on and why I am writing this BLOG. So let's start at the beginning why am I now on Version 4, I'm not counting the one I did pre dark age or the one that I am going to talk about first as it wasn't truly a MOC.

2015 - I had just joined a recognised LEGO user Group, two in fact but I decided to concentrate on one, and that one is Brickshire.  A shout out on our forum for Batman-related sets from an organiser for an event Brickshire members were displaying at piqued my interest and because I had quite a few sets I put my hand up.  This led to my first display at a show, it wasn't very skilled but it was effective.  I basically took  6860 The Batcave and placed it on Blacktron black baseplates, then stacked a lot of Small ugly rock pieces behind it.  Then displayed a load of Batman vehicles, which other members had brought as well alongside it. Including my first real MOC of the 1989 Batmobile.

That was how it all started for me, if I looked at it now I would critique it quite strongly, however, a few things happened, one the kids who saw it loved it, a couple of dads tried to buy it!  I also realised that you have to start somewhere.  I wouldn't say I am the best builder or an artist in any way. My ethos is simple I build what I like to build and I display it where I can, either at my house or at events if I think it's worth doing so.  I always believe if one person attending likes it then that's a success.  I would say that to anyone, (and regularly do if I'm honest). Build what you like and go for it we all start somewhere.  I did and I have been given feedback from builders who in my eyes are exceptionally talented and for me, their advice and ideas have helped me improve my skillset, and do things differently to achieve what's in my head.

Which takes us back to Brickshire and the doors being part of an RLUG opens for you. Not just the members and their expertise and advice, also the direct links to LEGO and access to the support programmes they have.  My first bulk buy from LEGO or LUGBulk I bought pieces in large quantities to build a Batcave. Which take us nicely to Batcave Version 1.

Continued in Part 2
Posted by CraigThisisBrickBuilding at 00:40 No comments:

Hi there an welcome to a montly blog by this brick building.

I still have to finish my previous Blogs so they can be published and that chapter of my life is done and dusted. Put a pin it as they say. 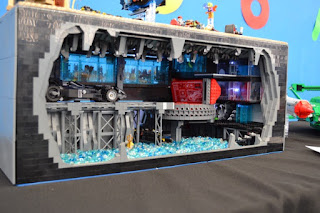 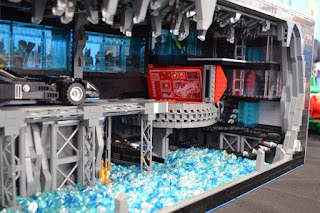 It has been a busy year attended the Yorkshire Brick Show, Mowbray brick Show and Bricktastic. All with my version of the Dawn of Justice Batcave.  All great shows and well attended.

Had a RLUG trip to Billund, and met some of the fantastic LEGO Community engagement team, as well as going on the factory tour and exploring Billund itself. More about that later on.

So next up is Brick Lincs in just over a week, again looking forward to this one and catching up with friends. 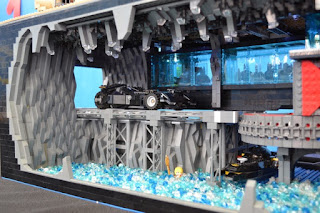 So what has kept me so busy apart from the above mentioned events and trip?  Well moving house is the big one. Moved in March and just about there with unpacking sorting etc.  Started on the LEGO room and that is coming along nicely, but have so much LEGO to sort. Will be doing a BLOG or VLOG on that soon.  Connor and I published our first test review of a set on YouTube and its not perfect but its a start to the format we are looking at publishing our reviews. The studio now needs a full set up and testeing so Connor can bring you his stop motion LEGO videos.

So much more to come and will be doing my Billund BLOG next.

Craig.
Posted by CraigThisisBrickBuilding at 04:41 No comments: